skip to main | skip to sidebar

Enjoying the sunshine, loving the green -

Most of the time we had too many students and not all of us had the chance to cook, but in kimbab class 5 of us attended only and all of us made as many as 3 kimbabs! :P 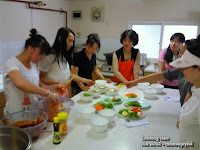 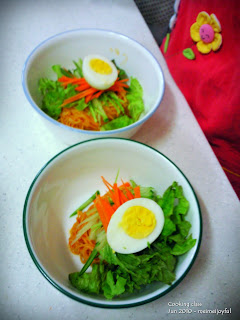 Well-served bibim-noodle (quite hot for the Philippine ladies) 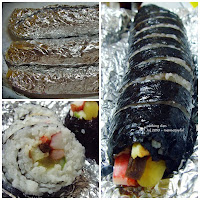 In the program I joined in the multicultural family support center of Gwangjin-gu since April, for the immigrant ladies, I only knew that there are a lot of us living in this area - from Philippines, Vietname, China and Japan. The program offered us:
In this August we are having summer vacation as the weather is too hot.

There are some telephone numbers that they ask us to jot down:

On 20th Jul,the Counseling Team leader, 권미경, of Emergency Support Center for Immigrant Women gave a talk for us. She encouraged us to know about our human rights and especally the rights for women.

On 27th Jul, a lawyer gave a talk on the law on the divorce and the ways to search help in emergency situations. She reminded us:

After these few months I joined program in the multicultural family support center of Gwangjin-gu (the area where I live), I found the information they provide is very useful for us, the immigrant ladies. Also, I hope this information will help those who are coming over here to stay.

The case of the Vietnamese girl, (naver search 베트남신부살해사건 to get more information) who was only 20 years old, was killed by the husband who is almost double of her age, in only less than 10 days she entered the country. The husband is diagnosed with mental problem. What a sad news... so the awareness of the government and the married ladies are both important. This type of case is not the first time, so we ladies should know our rights and get the useful living tips to live happily in this foreign country. 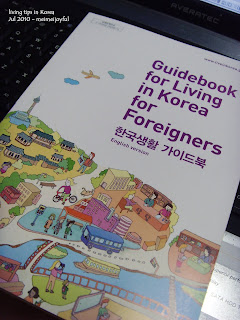 This booklet was given by the multicultural family support center. It is provided in different languages, while I got the English version. My Vietnamese friends got the Vietnamese version, Chinese got Chinese version and others.

Publisher: Korean Government
Planning: The Cenral Office for Multicultural Family Support Centers
This book was publised under the sponsorship of Ministry for Health, Welfare and Family Affairs 보건복지가족부,  Ministry of Public Administration and Security 행정안전부 and Ministry of Culture, Sports and Tourism문화체육관광부.
However, the contents of thi book are also available through the multicultural famil support portal site (http://www.liveinkorea.go.kr/)

Contents:
Get one copy for yourself is not a bad idea - as you can get a lot of information to ask in daily life (with useful website references and telephone numbers provided) 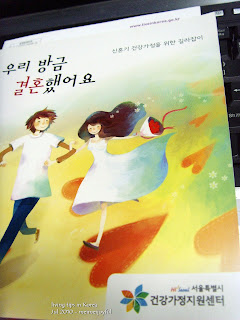 This mini booklet was also given by the center for married couples (printed by Seoul Family Support Center http://family.seoul.go.kr/ ). It was printed in Dec 2009, so there are lots of latest useful information (we're expecting our first baby in this coming Nov), especially there is the support from the government from pregnancy to the children education, health and others.
There is also a table listed out the congratulation-rewards for those who give birth of babies - from 1 baby to more than 5 babies. (Seoul governmnt encourages the residents to have babies) 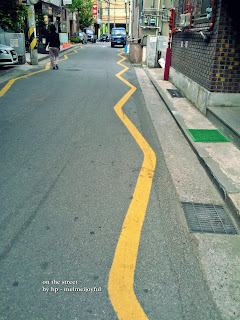 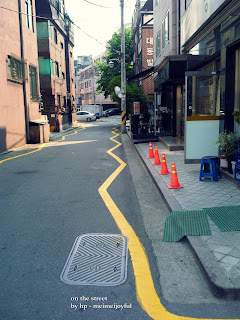 View from Jamsil Baseball Sports Complex to Sports Complex
Korea is famous of its baseball team, especially in the Olympic Games 2008. They won the gold medal. However, they were crazy for the sports, even before that. In Malaysia, we do not play this sports, thus actually I don't have much idea how to play the sports.
We have a friend who works at LG company and his company provided some free tickets when LG play in the tournament. On 25th May, we got the chance to watch the game LG vs KIA. It's very lucky for us that LG won that game. The result was 5:4. But actually LG lose in the early stage, but because of homerun, and later they worked hard and they won the game.
Oh ya! I finally got the chance to see Home Run! But the ball didn't come to our side. 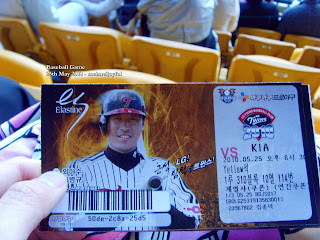 My ticket!
I don't know about the guy in the ticket but my friend told me he is a good player (though that night he was not the star). 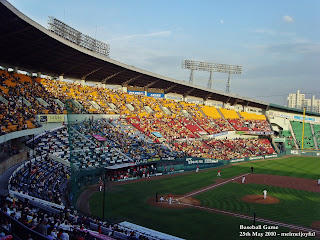 The game started 6.30pm and the sun still brightly shining. I like summer.
There were already thousand over people there in the sports complex. We missed the chance to see the celebrity who started the game with either throwing or hitting a ball. We were looking for the ticket booth because we got free tickets and so we were late to enter the stadium. :( 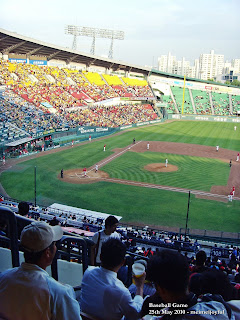 This picture just to show you that... we sit far away from the field.
The players are so tiny, right? See from TV is clearer.
Another one is, the seats opposite of us is KIA supporters.
Our side is LG supporters.
When any of the team hit the ball, the cheerleader led the supporters to sing, to shout and the cheerleading team danced. Wow! I like the Korean supporters!
But... since I'm pregnant, I felt so exhausted easily and left earlier. 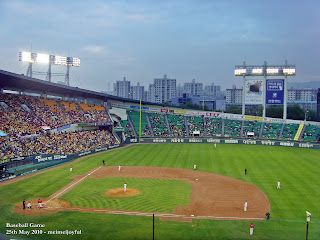 This photo was taken at 7:52pm
Round 6 (if I'm not mistaken)
It's getting dark but ... the cheering sound didn't stop. 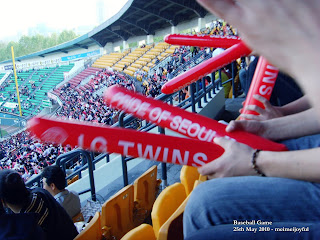 They used these balloons to make sound.
Let's see some videos, not very clear, but hope you can enjoy the live performance as we were.
There were also free stuff to give away in the middle of the show, like kissing couple, lucky number, etc. The big screen showed the audience in the supporter zone randomly then they can get free gifts. It is such a good marketing way. 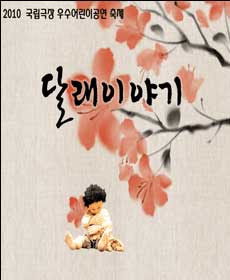 Doll Performance
I got the free tickets from Korea4expats.com to have a chance to watch the doll performance - Dallae's Story. My friend and I watched it on 19th May, Wednesday.
Because of the remembrance of war, for the education purpose, this performace was held in the National Theatre of Korea from 14th May to 22th May 2010.

I like it very much because the dolls are really well made, it is sweet though the storyline is quite sad. The story was started with a happy family, performing in 4 seasons, but later on war came and everything changed. The dad died and left the mum and the child toy.
It is a non-verbal performance, and thus with the music background and puppets, toys, and the light effect, it became an amazing show. It can even help the children to know the actions  of  dolls - just like the animation on TV, it was originally moved by human action by action. It's not easy to move the doll by hand.

I think my baby inside of me enjoyed the show too. :)

After we watched the show, we found this mini house was shown outside the hall. 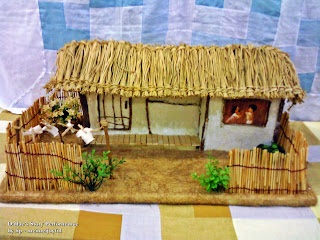 Flowers are all around you this summer, stop for a while if you see some! You will certainly can't resist its prettiness. Especially try to smell the wild roses.
Share with you some taken by my hp. 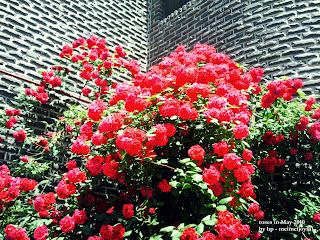 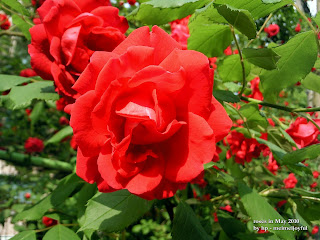 The redness of rose is shining 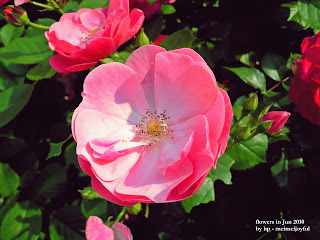 This pink flower is shining under the sun too... 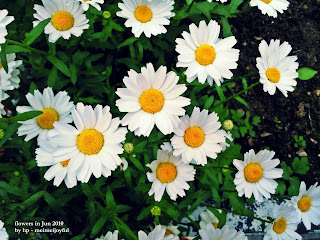 yminkorea by meimeijoyful is licensed under a Creative Commons Attribution-Noncommercial-Share Alike 2.0 Korea License.